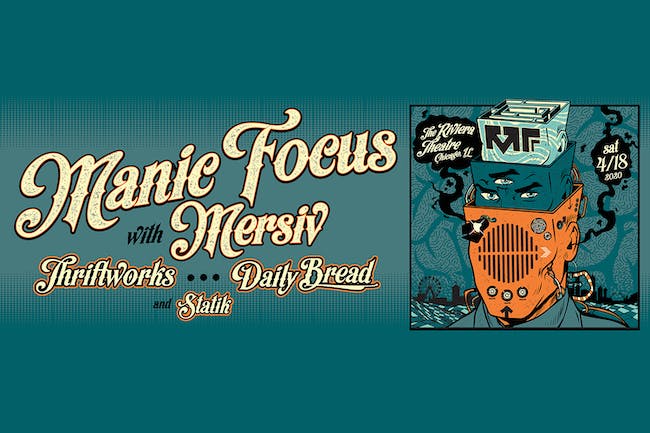 THIS SHOW HAS BEEN POSTPONED

Information regarding a rescheduled date will be announced as soon as possible. Tickets purchased for the originally scheduled performance will be honored on the new date - no need to exchange.

Manic Focus is the electronic music project of John “JmaC” McCarten, a Denver-based producer with roots in funk, soul, and new-era hip-hop. A multi-dimensional artist with a rowdy style that spans multiple genres, Manic Focus transcends sound waves by fusing soulful blues with heavy-hitting bass, creating a resonating tone that’s entirely his own.

Originally hailing from the Twin Cities, McCarten grew up with classical piano lessons from an early age, developing a trained musical ear and laying the groundwork for his future in beat production. In his teen years, McCarten developed a deep appreciation for hip-hop music, citing musical influences such as Atmosphere, Brother Ali and MF Doom. In high school, McCarten would spend day and night in the basement of his family home teaching himself Ableton software, relentlessly trying to replicate the hip-hop rhythms he grew up on by making beats for his friends for fun. It was around this time that McCarten realized his music had a profound impact on those around him, and the self-taught producer began making his own music full-time.

Over the last 6 years, McCarten has released six full-length albums, each one a new evolution in sound and approach. The producer continues to push himself to new musical limits by incorporating original, sample-free recordings, which is especially apparent in the material from his latest album Lost in a Digital World, released in September of 2019. Lost in a Digital World further cemented McCarten in the upper echelon of producers and paints an aural illustration of his creative process and experimentation with different genres. The album draws elements from the realms of house, dubstep, trap, hip-hop, electronic, downtempo and beyond, and is perhaps his most cohesive body of work to date.

His fifth studio album Minds Rising was released in April of 2017 and debuted at #7 on the iTunes electronic music chart, featuring appearances from cutting-edge hip-hop artists, vocalists, producers and musicians across the country. Collaborators included Jennifer Hartswick of Trey Anastasio Band, Adam Deitch of Lettuce/Break Science, Russ Liquid, ProbCause, and Late Night Radio, among others. McCarten has also completed a slew of official remixes for notable artists such as Louis the Child, Zed’s Dead, Pretty Lights, GRiZ, The Floozies, Umphrey’s McGee, PLS&TY, Lettuce, and Minnesota.

On the road, JmaC has been steadily building his live performance to include additional musicians and elements of production. Jacob Barinholtz is now a mainstay on the drums, and other musical co-conspirators join the two on select dates around the country. He’s also been known to incorporate surprise guests such as Big Gigantic’s Dominic Lalli, GRiZ, The Floozies’ Matt Hill, and Russ Liquid, to name a few. Occasionally, fans are treated to the rare live fusion of Break Science and Manic Focus, taking the stage as Manic Science.

The Mersiv Sound Project is the brainchild of Anderson Benoit Gallegos. Producer/DJ Anderson has been developing a unique pretty-dark-loud style of bass music since he started his musical journey in 2015. The intentions of this project are to bring people into the present moment through a Mersiv experience.