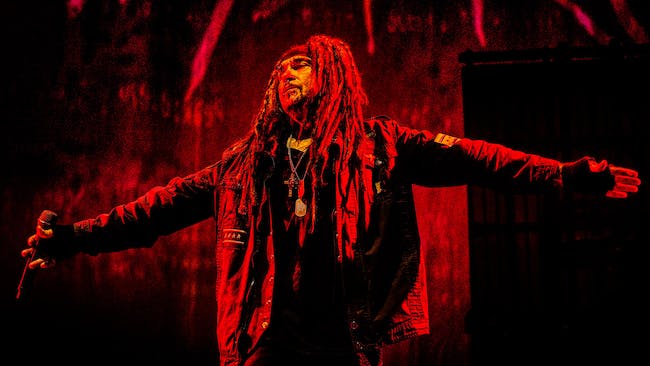 MINISTRY’s Al Jourgensen, the acclaimed pioneer of industrial music, doesn’t muck around, doesn't sugar-coat, doesn't pull punches. He’s highly opinionated, exceptionally well read and articulate on subjects ranging from politics to alien conspiracies to American history to his beloved Chicago Blackhawks/Bulls/White Sox/Bears. He is an avid follower of NASA scientist David S. McKay, ancient civilizations scholar Zecharia Sitchin, astrophysicist Neil deGrasse Tyson, and Scottish writer/archaeologist/scientist Graham Hancock. During a layover at the Las Vegas airport this past summer, Jourgensen spotted U.S. Congressman Adam Schiff, introduced himself, and took full advantage of the encounter to let the Congressman know of his views on tax reform and the possible perils of redistribution of wealth, the current obstruction of the “Russia-gate” investigation by the House Intelligence Committee lead by Republican Chair Devin Nunes, and to inquire about the status of the possible impeachment of the President, on not only obstruction and collusion charges, but for treason.

You see, Al Jourgensen is angry, really angry about what’s going on in America - sexual abuse and the disrespect of women in our society, the waning respect for the U.S. Constitution, the growing acceptance of one's opinions replacing facts, the decline of the our leaders’ sense of morals, ethics and personal responsibility to the country and to their constituents, and the mad man in the White House. Yeah, Al is angry, and that takes us straight to MINISTRY’s upcoming album »AmeriKKKant«.

Before all of that, the industrial machine that is MINISTRY has manufactured immense amounts of sound during its 30+ years of musical artistry. Initially coming into existence in 1981, MINISTRY was to be the lifetime passion project of front runner and founder Al Jourgensen. Often associated with ideas and imagery that are easily recognized today, in part because of Jourgensen’s insanely dreaded hair, pitch black attire, vampiric glasses, and exquisite top hat, the band has become incredibly symbolic. But like any creature cursed with the gift of creativity, “Uncle Al” has shed his skin several times over the decades. The development of MINISTRY and all of Al Jourgensen projects has been purely organic, which is a huge reason why the masses following his projects are so vast.

Often referred to as one of the founders of Industrial Music, the true outlook of MINISTRY as well as Jourgensen's other projects, is far more fluid than just one specific genre. SURGICAL METH MACHINE, REVOLTING COCKS, and anything Al “Fucking” Jourgensen has produced all explore different realms of sound and thought.

In the year 1981 in Chicago Illinois, MINISTRY was initially born. With an original line up of Al Jourgensen doing lead vocals, guitar, programming and overall production, Stephen George on drums, Robert Roberts on keyboards and backing vocals, and John Davis also on keyboards and backing vocals. New sounds were constantly being developed in the 80’s especially as technology improved. At first the band had a very catchy, synth-pop sound. They began by releasing four 12” singles on Wax Track! Records starting in 1981, and released their first LP »With Sympathy« in 1983 via Arista Records.

As time progressed however, so did MINISTRY, and they quickly developed a harsher, and even more stylized industrial sound that they soon became infamous for. In the mid to late 80’s the band gained a progressively greater following as it released albums »Twitch« (1986), »The Land of Rape and Honey« (1988), and »The Mind Is A Terrible Thing To Taste« (1989). The darker, heavier sound that MINISTRY had developed into was often a direct reflection upon modern concepts, society, and politics. It was also during this time that Al Jourgensen himself reached one of his many peaks of creativity and branched off into what would be one of his many side-projects: REVOLTING COCKS. He also began producing a vast amount of other music by artists similar to his realm in one way or another such as NIVEK OGRE/SKINNY PUPPY, THE REVEREND HORTON HEAT, NINE INCH NAILS, SMASHING PUMPKINS, CHEAP TRICK and RED HOT CHILI PEPPERS. With the release of »Psalm 69: The Way to Succeed and The Way to Suck Eggs« (1992), MINISTRY hit an all-time high in the mainstream musical realm and even received a Grammy nomination. »Filth Pig« was released in 1994 and by then MINISTRY had not only grown a solid fanbase, but a solid reputation as well.

Famous for a hellaciously unique talent and sound, pure heinous insanity while on tour, and endless energy filled performances at countless festivals, MINISTRY had developed a cult following and would go on to release several more records throughout the years before eventually taking a hiatus. On December 23rd, 2012 then guitarist Mike Scaccia suffered a heart attack and passed away. It was not long after this that Jourgensen took what was to be an indefinite leave from doing anything MINISTRY related as he could not bare to continue without Scaccia. It wasn’t until recently that Jourgensen decided that if the circumstances were right, he would consider reawakening MINISTRY to release something new to the world.

Now, in 2017 MINISTRY has reunited, revamped its line-up, signed to Nuclear Blast Records, recently returned from a full world tour, and is now preparing to release their 14th studio album, »AmeriKKKant«, on March 9th 2018. Society and Politics have taken a turn for the insane and frightening in the United States and across the globe, leaving much inspiration and frustration for MINISTRY to draw from. Jourgensen remembers his shock while witnessing everyone and everything around him during the recent election process, and awoke on the morning of November 9th 2016 proclaiming: “We are making a fuckin’ album - right now.”

»AmeriKKKant«, like all MINISTRY projects, is an organic reflection of not just the band’s talent and sounds, but of the society in which we all live and breathe. Jourgensen says “I’ve spoken my piece on the societal conditions that would elect such a blithering idiot. It’s not an anti-Trump album, it’s like a- ‘did you pay attention in school? Does anybody have any intellectual curiosity anymore?’- album. [It’s] basically just holding up a mirror to ourselves and saying: ‘Look at this, is this what you really want to be?’”

With a new line up, incredibly full sound, and some might say a return to the roots of MINISTRY, the band is prepared to release a record that is socially relevant and sonically effective. Fans can look forward to a hearty future for not just MINISTRY, but SURGICAL METH MACHINE, and REVOLTING COCKS as well. There is simply too much insanity in this world for Jourgensen not to speak his mind and keep our senses alive with his vast array of decibels and visuals: “I’m afraid for the stupidity of not embracing nonsense. I think nonsense is a great escape from the rigors of being in life’s hamster wheel.” 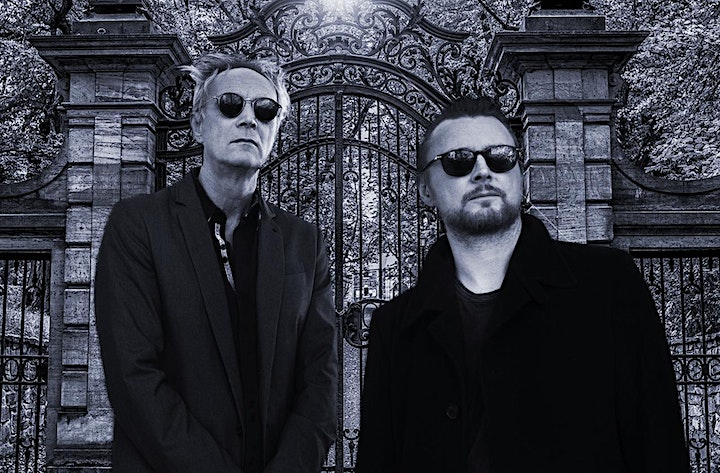 Front Line Assembly began in 1986, releasing several albums between 1988-92 that saw the group acknowledged as electronic/industrial/EBM scene heavyweights alongside Front 242, Nitzer Ebb and Skinny Puppy (Founder Bill Leeb had been a member of Skinny Puppy prior to forming FLA). The 1989 album, ‘Gashed Senses & Crossfire’ (1989), was promoted with major tours that saw Rhys Fulber joining the band. Fulber and Leeb became a creative tour de force, creating the genre-defining classics ‘Caustic Grip’ and ’Tactical Neural Implant’ in 1990 and 1992.

Front Line Assembly has always pushed the boundaries of the genre it helped define. ‘Millennium’ and ‘Hard Wired’, saw the group flirt with industrial metal sounds in tandem with trademark electronics. 2013’s ‘Echogenetic’, incorporated elements of glitch and dubstep, creating a potent hybrid of their most successful pure electronic releases and blurred the boundary between electronic industrial and what is generally perceived as modern electronica.